Newsmax was the victim of a Gotcha! The conservative cable TV channel aired an interview live on Saturday with who they thought was Paul Wolfowitz, the Deputy Secretary of Defense for George W. Bush at the time of the 9/11 attacks. But it wasn’t really Wolfowitz, rather an imposter who tricked them just three weeks earlier with a similar stunt.

The clever imposter was Andy Bichlbaum, a member of a group known as The Yes Men who “destroy brands, create public illusions, work with communities, disrupt events, and impersonate nefarious entities — in order to bring attention to critical issues, cheerlead activists, and, sometimes, galvanize communities into more action.”

As the 20th anniversary of the 9/11 attacks on U.S. soil, Newsmax reached out for an interview with Wolfowitz to ask him to reflect back on the horrific events that day.

Bichlbaum — or so they thought — called in, saying live on air, “I’ve got to tell you, Newsmax is a much bigger threat to America than the hijackers of 9/11.” He, of course, was cut off. Unbeknownst to the network at the time, they instead got in touch with the Yes Men pranksters, not the former member of Bush’s Cabinet. 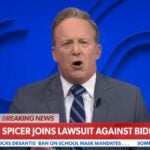 “While we were covering special 9/11 remembrances and honoring those who had lost their lives, including heroic police officers and firefighters, horribly there were others whose only goal is to lie, deceive, and destroy. They dishonored the memories of true heroes,” a Newsmax rep said in a statement to TheWrap about being duped.

This is the second time in a month that Bichlbaum managed to trick the network. On Aug. 21, “America Right Now,” host Tom Basile also believed he was interviewing Wolfowitz on the phone, in order to get his insights on the Taliban takeover of Afghanistan.

The Yes Men’s original plan was for Bichlbaum to pose as a fake colleague of Wolfowitz’s for the scheduled interview. But when he signed on to chat with the Basile’s producer, Bichlbaum was patched in to the show live… and Basile interviewed him for 11 minutes straight without catching on.

“It’s very clear $2 trillion could have gone to things that Americans could now be proud of, instead of a 20-year unwinnable war,” Bilchbaum said then. “The next time we have two trillion dollars lying around, let’s spend it on something useful like health care or education.”

You can watch that segment in the video below:

To continue reading for free, provide your email below. Enjoy!

WANT TO GO DEEPER?
SIGN UP NOW FOR YOUR